Please if you find a broken link or missing picture report it to Carl just click the mailbox below, Thanks

BELL and HARLAN COUNTY’s THE GATEWAY TO THE WEST

D uring the Revolutionary War, and immediately after, a mighty impulse stirred the people of the Atlantic Coast region ---an impulse to cross the mountain barrier that impeded their progress to the West. A vast wilderness lay across these mountains and beyond toward the Pacific Coast. It was an unknown country, a new country to be discovered and occupied. Its vagueness and vastness intrigued their imaginations. From time to time hunting parties penetrated eastern Kentucky through Cumberland Gap and gradually learned of the possibilities of the new country. Immigration began to flow into the region and the movement to settle the West had begun…

.   Harlan and Bell County stood at the very gateway to this movement and passed the moving hosts on into the mountain region of Kentucky, into the bluegrass, and on into the West

.   Less than two hundred miles inland, and parallel with the Atlantic Coast, were the mountains.Beyond these lay a wilderness of unknown extent,the occupation of which presented obstacles scarcely less formidable than those which attended the first planting of the colonies.

With the accomplishment of independence, however, the time came for passing the western barriers; the section of occupied territory was to widen from a narrow ribbon along the coast line to the whole extent of the continent.Space was to be cleared for the gigantic growth to the new Republic, and the coming wonders of railway and steam navigation.

It was in the far-distant region of Kentucky that the permanent occupation of the West began. In the heart of that region, full five hundred miles as the crow flies from the sea coast, and more than three hundred miles beyond the crests of the mountains, population suddenly gathered and civilization suddenly bloomed.

It was not an adventure of bold men alone, but a movement of men, women and children. It is equally wonderful that from the first they were imbued with the idea of permanent settlement and residence in the far-west country.It was to be their home; return was not thought of. They carried with them all their possessions, and as the alter-fire for the distant colony they carried with them a clear perception of the prime necessity of stable government,of obedience to law, and the observance of order."

Copied from “The Historyof Bell County” By Harvey Fuson

I n the nineteen twenties, thirties and forties the town of Harlan Kentucky earned the reputation of being BLOODY HARLAN fair and square. Harlan was characteristic of the gold rush days of theold west where life was cheap and anything that money could buy was for sale, of course the days of the Belmont Hotel and gunfights in the streets are over as the gradual evolution of the city of Harlan and her people made their town a decent place for hard working people to raise their families, although this is not to imply the corruption of certain politician's is altogether gone.

Born in a small town called Loyall where I lived the first nine years of my life, after the death of my grandmother Annie Estes and moving to Harlan we then moved to Birmingham Alabama for about a year, then back to Loyall again. Leaveing my newly found friends home in Loyall I later moved to an old coal camp on the outskirts called Sunshine with my mother and step father, there were other members of the family living in the same area Grandmother Louisa {mammy} aunt's uncles and of course cousins, my friend "Homer Richmond" he lived two houses down and my friend "H" "Kenneth Hampton Combs" who lived in town both passed away at very young ages, this place I called home and still do in my mind although I only lived there a few years I remember it as being home where I went fishing and prowled the mountains the same mountains that have been raped of it's coal and logged for it's lumber leaving huge scars, they have been tunneled under and chopped through to divert the rivers and all in the name of progress.There is good as well as bad in everything man try's to improve on however when man try's to improve on nature he is a huge failure but when there is a dollar to be had nature will always take the back seat...in these mountain's I played and lived a kind of happy carefree life with my friends and cousins kids today can't safely enjoy, for the values and morels of strangers must be suspect in these times .. 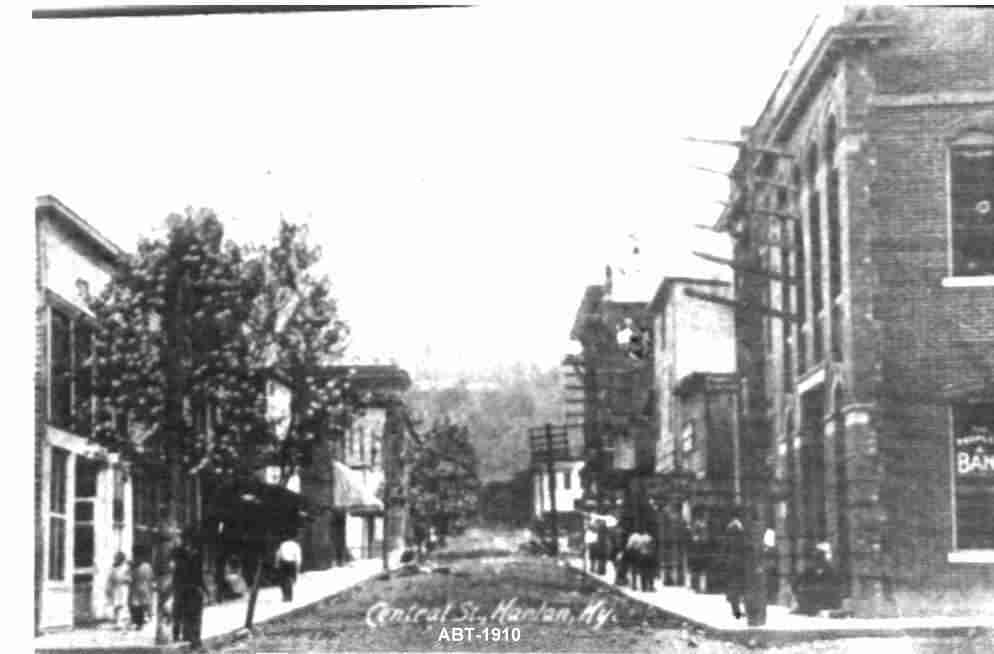 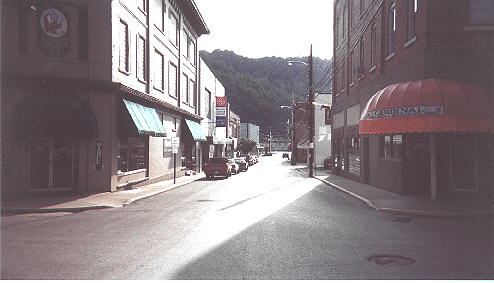 
Below a large crowd gathers for a circuit court meeting
Church services were held in this courthouse as far back as 1881
In the background left that looks like Hamp and Cam Huff's house before the porch was added
upstairs and down . 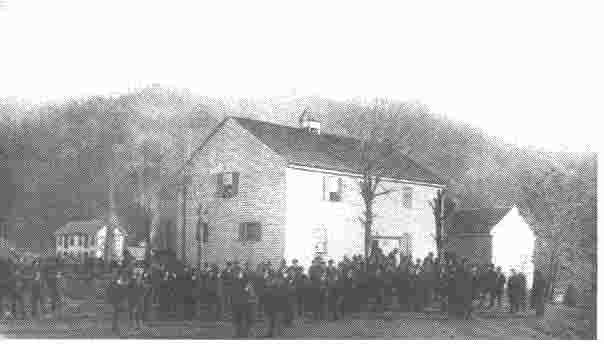 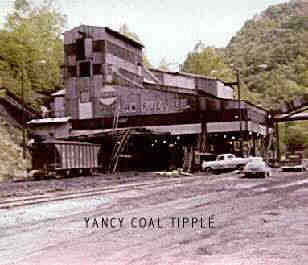 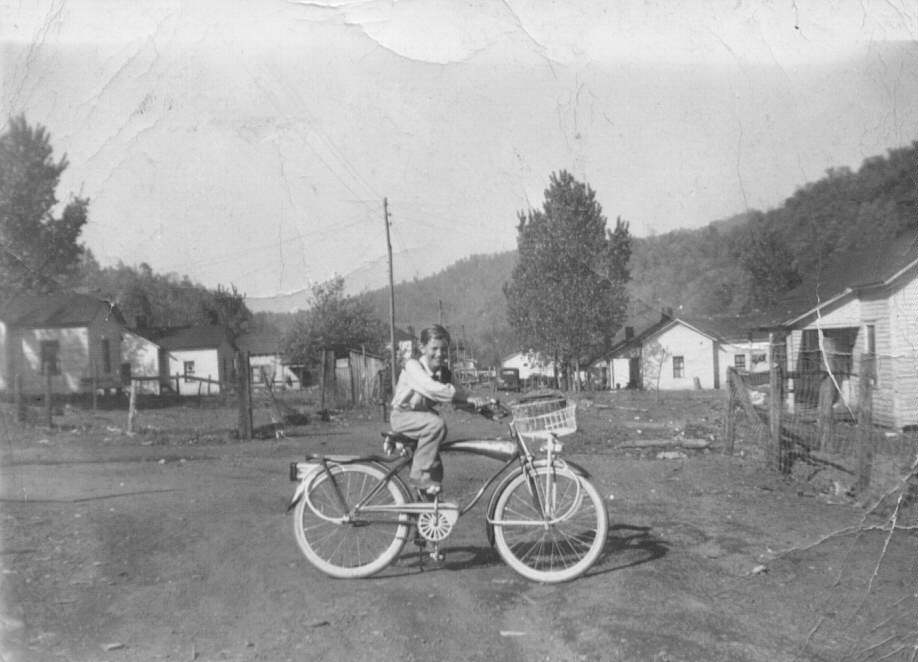 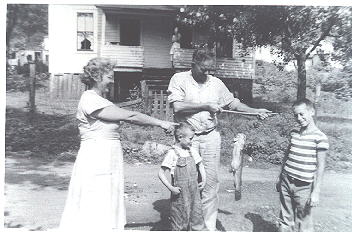 Mr and Mrs Taylor with Paul Richmond and the Redmond boy they adopted.. Mrs Marshal is on porch behind them this is in Sunshine about 1950 or 51,
and one of the things I remember best about Mr Taylor, he sure could catch catfish, this is a small one.. 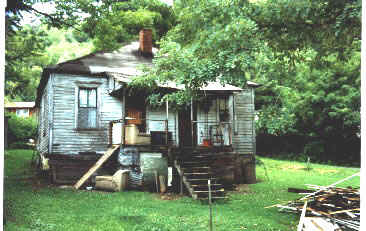 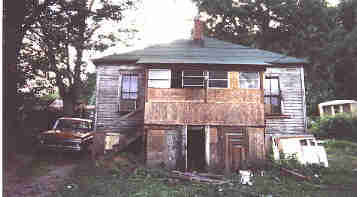 Some of the houses in the old coal camp area of Harlan known as "Sunshine" are on the verge of collapse as a few already have. I remember very well the folks that lived in the house above, the Marshals, later on the Shepherds   and even later my brother Buddy Estes and his family,these old coal camp houses have seen their better days but have a marvelous history to tell of families sheltered and children raised. I think everyone would agree they deserved better for they are a museum of life in its self....

The Story of the coal war

W hen the UNITED STATES cranked up its factories to supply raw materials for Europe in the nineteen twenties and thirties a great demand for coal was created and the mountains to the west and north of Lee County Virginia and Harlan County Kentucky were full of the black gold they called COAL, every able bodied man who wanted work found it in the coal mines. Some men had to walk many miles to work every day and others lived in the coal camps in company houses, many men died in these mines and others migrated to jobs in safer industries when they opened up. At that time though there were about a dozen or so coal companies up the hollows [hollers] leading away from Harlan town proper,,  in 1925 Harlan County had 64 mines operated by 50 coal companies and most all the company's had a camp [company housing] for the miners. These miners and their families had more than the dangers in the mines to worry about for the coal companies in addition to just plain cheating the miners out of their just wages they had hired thugs{they liked to call themselves deputy's}to discourage the unionization of these mines and those thugs would not hesitate to blow up or burn a company house or any house for that matter with the miner and his family in it if they suspected union activities or union talk was taking place there, many miner's died and although by accident when trying to kill the miner sometimes a child would be killed, just because dad wanted a better life than the slavery the mine operators had to offer, if you were lucky they just ran you out of the county, with the threat of death if you returned,it was a perilous time for the miners danger in the mines and danger at home too I can remember a lot of miners funerals when I was a boy for I lived in an old mining camp with my mother and step dad, the mine at this camp was closed but there were miners living there who worked at other mines and accidents and slate falls were common and one time that I know of a planned explosion just a few houses away, this one was aimed at Harvy Fuson who wrote the book "History of Bell County" a Mr Roy Redmond was killed when a case of dynamite rigged in Mr Fuson's car exploded when the key was turned to start it
.
Curiously some of these company thugs went on to be prominent men in the Harlan community, one that I know of personally was elected Mayor of Harlan.

M Most companies had a company store and the miners could go to the office and draw script [company money] for work done the day before however this script was only good at the company store where prices were greatly inflated and if there was a strike going on they were very selective who they let go to the store, which is very important since no one was allowed to leave the company camp and the thugs would let no one in either, in one instance a machine gun was mounted on a meat case to make sure no one ate, if a family could make it to payday they could be paid in real money and shop where they wanted however they were subject to punishment and harassment if they did not shop the company store. Yancy Kentucky home of the Harlan Fuel Co. and also the mine at Martin's Fork saw a lot of Wilson's and their relatives laboring there however I don't have any record of Isiah Wilson my Great grand father working in the mines this is not to say he did'ent I just cant prove he did or did not. Isaiah was a farmer this is the only way I have ever found him listing his occupation,it was a hard life but it was all he knew and even though they grew most of what they consumed and I'm told used the barter system frequently they did sometimes need a little cash I suppose. However working in the mines digging coal, sometimes for as little as fourteen cents a ton could not provide much, it was often said by the miners themselves that "they didn't even own their own soul's"

The life back then was Isuppose hard by our standards today but more simple and so much less complicated than today, family values and family ties were stronger and though they worked harder they slept better and knew that

God had blessed them.

Names in Hell In Harlan

A really good site for photos of HARLAH COUNTY and the mine towns
Powered by counter.bloke.com

Back to Front page